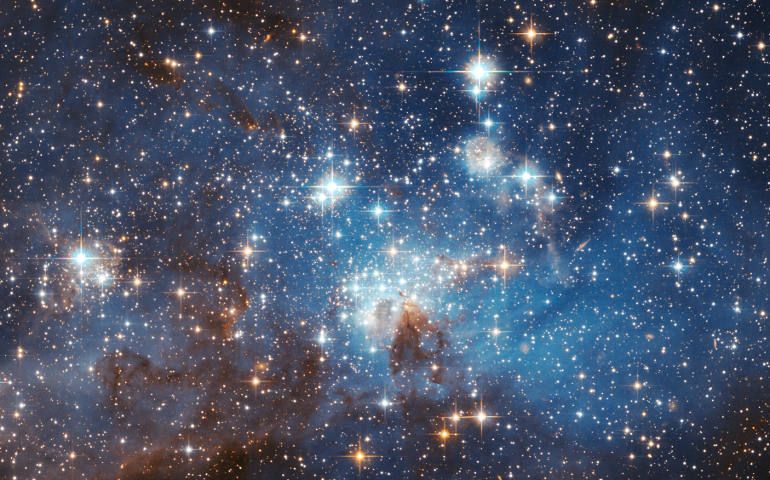 A set of online courses set to debut this week will offer students an introductory dive into cosmological thought and the epic story of the unfolding of the universe and life itself.

“Journey of the Universe: A Story for Our Times” is a course series created by Mary Evelyn Tucker and John Grim, both research scholars in Yale University’s School of Forestry and Environmental Studies and co-founders of its Forum on Religion and Ecology.

The three-class program explores the universe’s formation through a multidisciplinary lens, along with the evolutionary implications for humans and their ecological future. It builds off the worldview of Passionist Fr. Thomas Berry, with one of the classes dedicated to his life and insights.

Tucker and Grim, who will teach the courses, are both students of Berry. In Tucker's words, she and Grim, her husband, have “lived and breathed” elements of the “Journey” work for more than 30 years since they studied with Berry in graduate school.

In 1992 Berry co-authored The Universe Story with cosmologist Brian Swimme, but it’s a book Swimme wrote with Tucker a decade later, Journey of the Universe, that forms the backbone of the academic program bearing the same name. Along with the book, the classes draw on a 2011 film, also titled Journey of the Universe, and an educational DVD series, “Journey Conversations,” where Tucker interviews scientists, historians, environmentalists and artists.

The trio of courses, along with a capstone, are a type of MOOC (Massive Open Online Course). They are offered through Coursera.org, which partners with universities worldwide in an effort to make education more accessible. The courses, which are open to anyone, start Wednesday and run through November; the six-week capstone project begins Nov. 2. Students can opt to enroll in any one of the courses on its own (at $79 per course) or enroll in the full program ($284). Portions of each course are also available to audit for free. The courses, however, do not earn university credit.

Two of the classes focus on the “Journey of the Universe,” with the first looking at the unfolding of life, and the second envisioning what our evolutionary journey could be today by weaving knowledge with activism. The third course examines Berry’s vision of the Earth community functioning as a living cosmology.

The “Journey” program, which is geared toward novices to cosmology, ties together recent scientific and evolutionary discoveries with history, philosophy, art and religion. The courses examines cosmic evolution as a creative process from the very beginnings of our universe 14 billion years ago. It envisions what role compassionate human beings, awaken to their integral role in the universe narrative, might hold “at this critical juncture in our planetary history.”

The Yale program dovetails with the ongoing Christian celebration of the Season of Creation, which began Sept. 1 with the World Day of Prayer for the Care of Creation and concludes on Oct. 4, the feast of St. Francis of Assisi. That the season and the course intersect “is a marvelous synchronicity,” Tucker told NCR in an email.

“The Season of Creation is a further invitation to participate in the call of the papal encyclical toward an ecological conversion,” she said, responding from Germany where she was speaking at a Potsdam Institute conference looking at Laudato Si’ as a catalyst for social change.

The Yale program adds an expanded dimension to the Season of Creation by celebrating the wonder of who humans are -- direct descendants of the stars. As Swimme and Tucker wrote in their book, “The essence of the Universe story is this: The stars are our ancestors.”

Berry, a historian of world religions who recognized the environmental crisis early on, insisted that celebrating this “star truth” will save the world from environmental devastation. It is ultimately wonder and delight that will guide us, he reiterated many times throughout his life. In The Universe Story Berry and his student Swimme tell how a solitary molten spark, unleashed by a creative force 14 billion years ago, has unfolded over time from stars into butterflies, giraffes, roses, oceans, mountains and humans.

Understanding the lineage of a continuous cosmic history can have dramatic real-life impacts, as evidenced through several of the interviews Tucker conducted in “Journey Conversations” that are part of the online course.

Belvie Rooks, for example, is an educator who helped a group of disgruntled African American kids living in South Central Los Angeles place themselves in the context of star people. Caught up in the violence of neighborhood turf wars, they lacked an expanded sense of who they were, Rooks told Tucker.

To move them out of their hopelessness, Rooks created an interactive computer program where the youths could tell their own stories -- those of their immediate families and as far back as they could, including the history of slavery – and then view their own histories against a timeframe of 14 billion years. They looked at images of the universe from the Hubble Telescope and the famous NASA “Blue Marble” photo of Earth, as well as pictures of mountains and oceans and forests throughout the world, moving them beyond the pollution and ugliness in their own neighborhoods.

The project inspired them to “re-invent” their surroundings by joining a community program sponsored by a local congresswoman to help restore a trash-strewn empty lot into a green space.

Franciscan Sr. Marya Grathwohl, director of Earth Hope in Dayton, Wyo., has taught The Universe Story to prison inmates for a number of years. In her interview with Tucker, Grathwohl relates the story of an extremely unrepentant burglar. Once he participated in the three-week program in which the class made their own art -- ”Beauty creates relationships,” she noted -- the man decided there might be a way to escape from his destructive lifestyle.

“It doesn't feel right to break into people's houses and steal their stuff when I'm so connected to everything and everybody,” he told Grathwohl.

As Bay Area hip-hop artist/environmental activist Drew Dellinger summed up in his interview with Tucker, immersing oneself in the universe story “brings us face to face with a sacred revelation not based on dogma. We awaken to the mystery of creativity. We realize that there is no such thing as a thing, and that everything has a 'within.'”

A set of online courses set to debut this week will offer students an introductory dive into cosmological thought and the epic story of the unfolding of the universe and life itself.