Q & A with Sr. Miriam MacGillis, co-founder of Genesis Farm 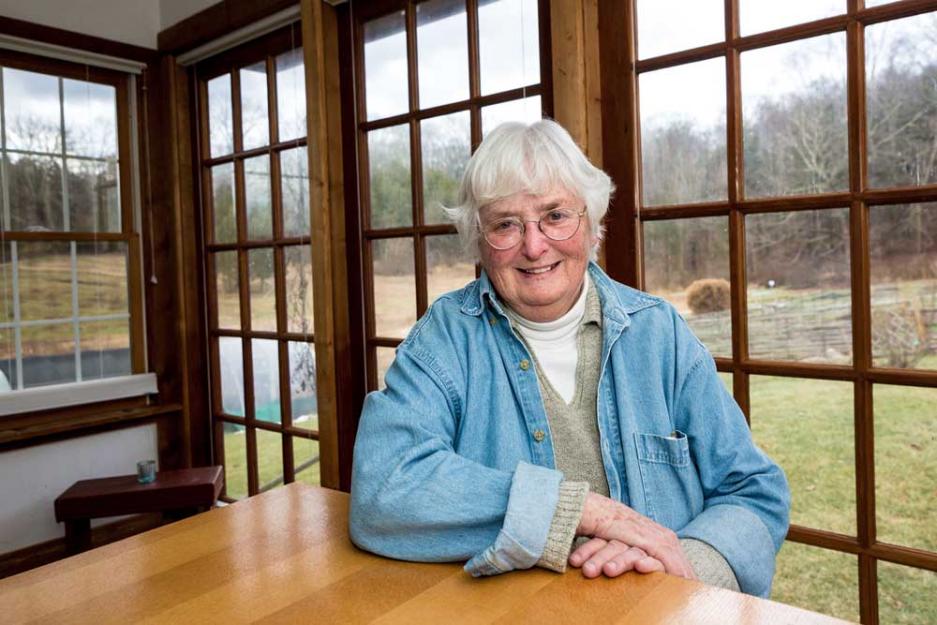 Sr. Miriam MacGillis of the Dominican Sisters of Caldwell, New Jersey, was a very happy art teacher in the 1960s. Then one of her students began to ask her questions about the Vietnam War, questions she had trouble answering. Questions that showed how naive MacGillis was on the issue.

Soon, MacGillis, now 77, had her own questions about the war and how the world works and her role in it.

Those questions would lead her on a path to a farm, of all places. And not just any farm: MacGillis in 1980 became the co-founder of Genesis Farm in Blairstown, New Jersey, which became a model for 50 similar ecological centers founded by women religious in North America.

GSR: How do you go from being an art teacher to a farmer?

MacGillis: I wouldn't call myself a farmer because that's an incredible vocation. I've been holding the vision of this farm since 1980, but other than some small gardens on the side, I don't do any real farming.

I had a major shift in my worldview back in the 1960s. My questioning went on for five years until I went into working for justice and peace. By 1974, I was focusing on world hunger, which by then was emerging as a major world crisis.

I found myself asking: How could there be hunger on a planet of such abundance? So I began delving into an analysis of the economics and policies that were shaping the growing and distribution of food.

Then, in 1977, I heard Passionist Fr. Thomas Berry for the first time. In 1979, I came to Genesis Farm, which had been left in someone's will to the Dominican sisters. We didn't really know what we were doing, but we were entering into an effort to live in harmony with the Earth.

So that's what we've been doing for the last almost 40 years. We look at local, national and global policies and systems, such as economics, health, governance and architecture, based on Berry's profound understanding.

Mankind has been farming for thousands of years. What makes Genesis Farm different?

We have grown up for thousands of years believing that humans who engage in farming are growing food. That is absolutely not the case. The earth basks in sunlight, synthesizes it and returns it to itself, and all the living things then live on that. The earth is growing the food. You're just a participant in the already-existing miracle of that.

Our model of how the world came to be that's described in the sacred texts is a very, very different perspective than what we understand through our scientific research. It calls everything into question that you once thought and once believed. You are part of the earth, not separate from and walking on the earth.

When you talk about these things, you almost never mention God. Some people would be surprised to hear a sister talking about creation and not mention God. How do you explain that to them?

It's an understandable question. The answer is that God is a mystery. We make images and pictures to describe the mystery, but those things limit the limitless. A picture is a prison for that mystery.

When we say, "Where is God?" we know from what we've been able to observe that the universe goes back almost 14 billion years. But even that's so far beyond our brains' ability to comprehend, why don't we let it be what it is and be grateful? It's 13 billion years later, and you're standing in a field, and that initial energy [from creation] has morphed all that you see into these different things. You're barely able to take it in. It's phenomenal.

Either the whole of everything that is reveals that mystery or nothing does.

So what has happened on the farm in the last four decades? What has changed?

The first 10 years, we were really struggling, not just to physically and economically survive, but more importantly, to clarify what our mission would be. For almost 20 years, we had residential programs where people could come here to study. Gradually, it became a program of undergraduate and graduate certification, where you take a 12-week plunge into ecology. And not just farming and ecology, but the implications of all that. What does it mean to be a human, and how do we bring our own activities into harmony with the Earth and the universe?

Lately, we have been in a revisioning period, which has taken almost six years of groping in the dark, asking: How can we take this same mission and put it into forms that are accessible for anyone who were to come here, not just for graduate credit?

There are two new and very serious circumstances around that. The first is climate change, which is irreversible and more serious than any leader is telling us about. The second is the implosion of our institutions, which are not capable of dealing with the crisis. The volatility of it, the unpredictability of it is just imploding everything. That will color everything we do in the future.

We need our old institutions. We need our religious wisdom, we need our governmental institutions, but they're no longer adequate on their own. They taught us that we have dominion over the Earth and that we could buy it and sell it. But we have to try to decontaminate radioactive water still leaking from Fukushima — no religion can help that. We have 85,000 synthetic chemicals we've made since World War II that we are now finding in mothers' milk and polar bears. We thought those things were part of progress, and we're realizing now it's not. It's a whole new order of wisdom that we need.

If the universe is holy and everything is holy and sacred, we sure don't act like we believe that.

Q & A with Sr. Miriam MacGillis, co-founder of Genesis Farm

Sr. Miriam MacGillis of the Dominican Sisters of Caldwell, New Jersey, was a very happy art teacher in the 1960s. Then one of her students began to ask her questions about the Vietnam War, questions she had trouble answering. Questions that showed how naive MacGillis was on the issue.