The Earth Is Just as Alive as You Are 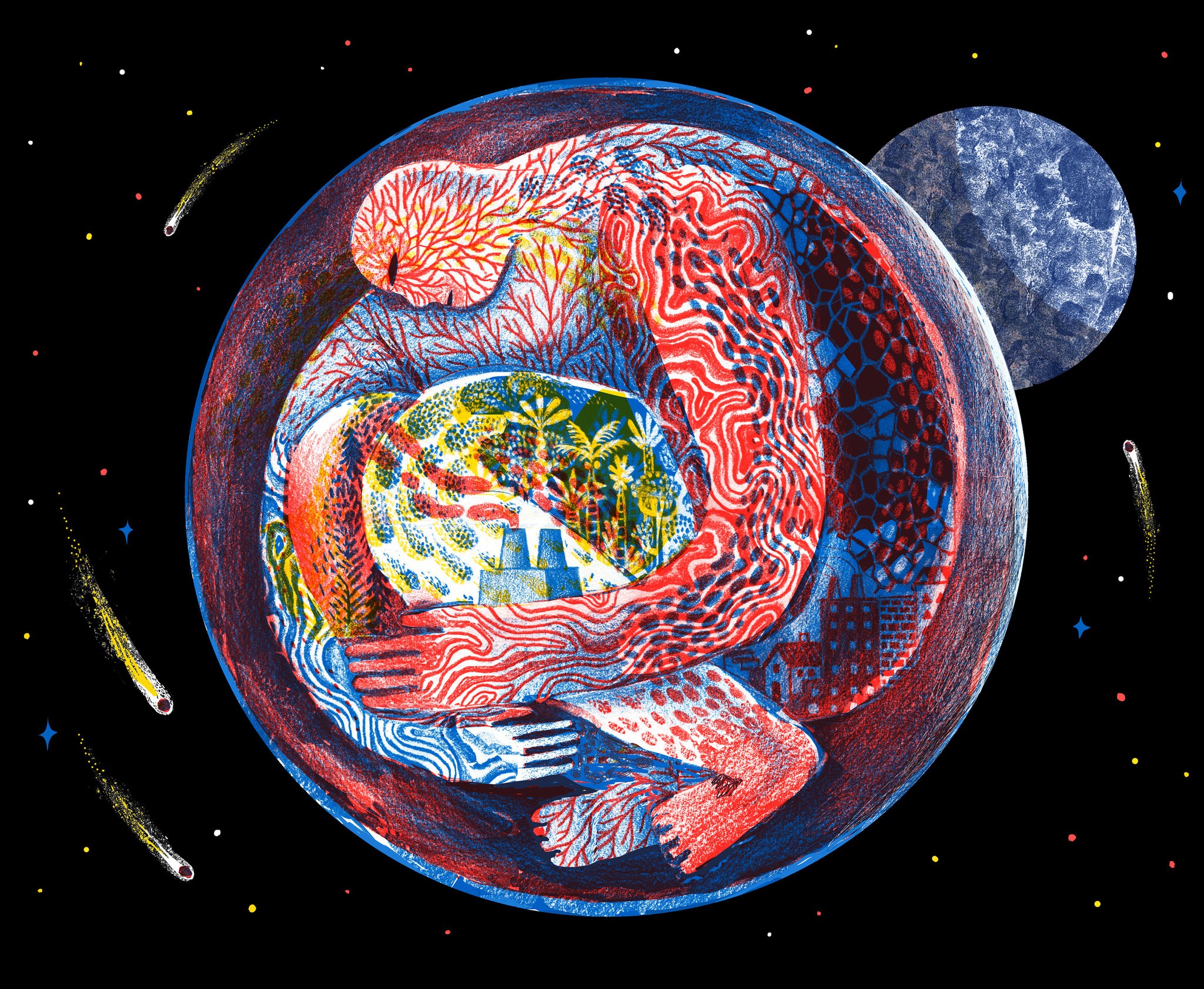 Every year the nearly 400 billion trees in the Amazon rain forest and all the creatures that depend on them are drenched in seven feet of rain — four times the annual rainfall in London. This deluge is partly due to geographical serendipity. Intense equatorial sunlight speeds the evaporation of water from sea and land to sky, trade winds bring moisture from the ocean, and bordering mountains force incoming air to rise, cool and condense. Rain forests happen where it happens to rain.

But that’s only half the story. Life in the Amazon does not simply receive rain — it summons it. All of that lush vegetation releases 20 billion tons of water vapor into the sky every day. Trees saturate the air with gaseous compounds and salts. Fungi exhale plumes of spores. The wind sweeps bacteria, pollen, leaf fragments and bits of insect shells into the atmosphere. The wet breath of the forest, peppered with microbes and organic residues, creates ideal conditions for rain. With so much water in the air and so many minute particles on which the water can condense, rain clouds quickly form.

The Amazon sustains much more than itself, however. Forests are vital pumps of Earth’s circulatory system. All of the water that gushes upward from the Amazon forms an enormous flying river, which brings precipitation to farms and cities throughout South America. Some scientists have concluded that through long-range atmospheric ripple effects the Amazon contributes to rainfall in places as far away as Canada.

The Amazon’s rain ritual is just one of the many astonishing ways in which living creatures transform their environments and the planet as a whole. Much of this ecology has only recently been discovered or understood. We now have compelling evidence that microbes are involved in numerous geological processes; some scientists think they played a role in forming the continents.

Trees, algae and other photosynthetic organisms produce most of the world’s breathable oxygen, helping maintain it at a level high enough to support complex life, but not so high that Earth would erupt in flames at the slightest spark. Ocean plankton drive chemical cycles on which all other life depends and emit gases that increase cloud cover, altering global climate. Seaweed, coral reefs and shellfish store huge amounts of carbon, balance the ocean’s chemistry and defend shorelines from severe weather. And animals as diverse as elephants, prairie dogs and termites continually reconstruct the planet’s crust, altering the flow of water, air and nutrients and improving the prospects of millions of species.

Humans are the most extreme example of a creature transforming Earth. By spewing greenhouse gases into the atmosphere, we have drastically altered the planet’s response to solar radiation, spiking global temperatures, raising sea levels and intensifying storms.

One of the many obstacles to reckoning with global warming is the stubborn notion that humans are not powerful enough to affect the entire planet. “I don’t believe it,” President Trump said in response to one of his administration’s reports on anthropogenic climate change. In truth, we are far from the only creatures with such power, nor are we the first species to devastate the global ecosystem. The history of life on Earth is the history of life remaking Earth.

Faced with this preponderance of evidence, it is time to revive an idea that was once roundly mocked: the Gaia hypothesis. Conceived by the British chemist James Lovelock in the early 1970s and later developed with the American biologist Lynn Margulis, the Gaia hypothesis proposes that all the living and nonliving elements of Earth are “parts and partners of a vast being who in her entirety has the power to maintain our planet as a fit and comfortable habitat for life.”

Although this bold idea found an enthusiastic audience among the general public, many scientists criticized and ridiculed it. “I would prefer that the Gaia hypothesis be restricted to its natural habitat of station bookstalls, rather than polluting works of serious scholarship,” the evolutionary biologist Graham Bell wrote in 1987. The microbiologist John Postgate was especially vehement: “Gaia — the Great Earth Mother! The planetary organism!” he wrote in New Scientist. “Am I the only biologist to suffer a nasty twitch, a feeling of unreality, when the media invite me yet again to take it seriously?”

Over time, however, scientific opposition to Gaia waned. In his early writing, Dr. Lovelock occasionally granted Gaia too much agency, which encouraged the misperception that the living Earth was yearning for some optimal state. But the essence of his hypothesis — the idea that life transforms and in many cases regulates the planet — proved prescient and profoundly true. We and all living creatures are not just inhabitants of Earth, we are Earth — an outgrowth of its physical structure and an engine of its global cycles. Although some scientists still recoil at the mention of Gaia, these truths have become part of mainstream science.

“It’s definitely time to revisit Gaia,” said Adam Frank, an astrophysicist at the University of Rochester. Some scientists even agree that the planet is in a very meaningful sense alive. “Life is not something that happened on Earth, but something that happened toEarth,” said David Grinspoon, an astrobiologist at the Planetary Science Institute. “There is this feedback between the living and nonliving parts of the planet that make the planet very different from what it would otherwise be.” As Dr. Margulis wrote, “Earth, in the biological sense, has a body sustained by complex physiological processes. Life is a planetary-level phenomenon and Earth’s surface has been alive for at least 3,000 million years.”

Those who bristle at the notion of a living planet will argue that Earth cannot be alive because it does not eat, reproduce or evolve. Yet science has never established a precise and universally accepted definition of life, only a long list of its qualities. Like many living creatures, Earth has a highly organized structure, a membrane and daily rhythms; it consumes, stores and transforms energy; and if asteroid-hitching microbes or space-faring humans colonize other worlds, who is to say that planets are not capable of procreation?

If Earth breathes, sweats and quakes — if it births zillions of organisms that ceaselessly devour, transfigure and replenish its air, water and rock — and if those creatures and their physical environments evolve in tandem, then why shouldn’t we think of our planet as alive?

Humans are the brain — the consciousness — of the planet. We are Earth made aware of itself. Viewed this way, our ecological responsibility could not be clearer. By fuming greenhouse gases, we have not simply changed the climate; we have critically wounded a global life form and severely disrupted its biological rhythms. No other member of this living assembly has our privileged perspective. No one else can see the sinews and vessels of our planetary body. Only we can choose to help keep Earth alive.

Gaia’s legacy can help us fulfill this responsibility. We can learn to recognize and amplify the planet’s innate climate-stabilizing processes. Earth has its own methods for storing carbon: A complex chain of chemical reactions involving plants, plankton and shellfish can lock atmospheric carbon in limestone. In addition to reducing carbon emissions, many Earth system scientists think we should study how to augment this natural sequestration and related processes.

In recent years the Amazon rain forest has endured unusually intense and frequent droughts, which some scientists have linked to deforestation and forest fires. It would be easy to compartmentalize these ecological shifts as local tragedies, but that detachment is an illusion.

Seen through the lens of Gaia, the Amazon’s plight is the draining of our communal veins and arteries. We must learn to feel its thirst viscerally. “We are a part of this Earth and we cannot therefore consider our affairs in isolation,” Dr. Lovelock wrote. “We are so tied to the Earth that its chills or fevers are our chills and fevers also.”

The Earth Is Just as Alive as You Are

Faced with a preponderance of evidence, it is time to revive an idea that was once roundly mocked: the Gaia hypothesis. Conceived by the British chemist James Lovelock in the early 1970s and later developed with the American biologist Lynn Margulis, the Gaia hypothesis proposes that all the living and nonliving elements of Earth are “parts and partners of a vast being who in her entirety has the power to maintain our planet as a fit and comfortable habitat for life.”