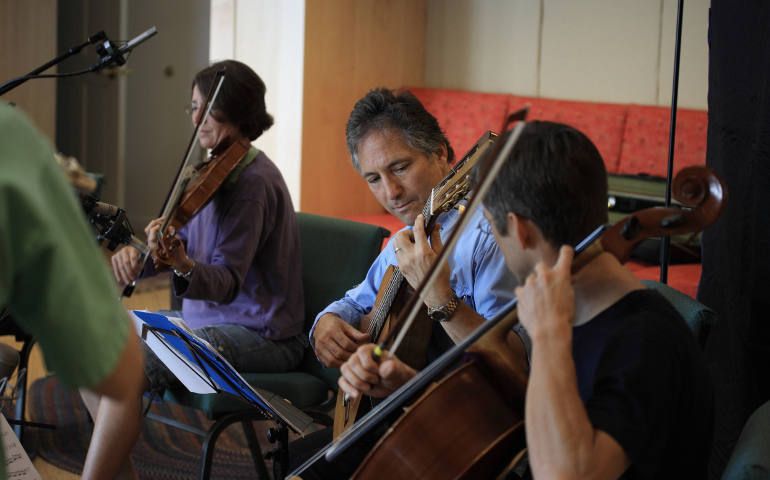 Passionist Fr. Thomas Berry, the cultural historian and early prophet of the current environmental crisis, encouraged artists and musicians throughout his lifetime (1914-2009) to tell the magnificent 13.8 billion-year history of the universe through music, poetry and dance.

As direct ancestors of the stars, humans collectively share a unique role as compassionate beings, to protect and to heal the earth, Berry said. Creative artists, he argued, can bring us to this point of conversion quickest of all.

The latest evidence that they have been listening is Sam Guarnaccia, a composer, classical guitarist and environmentalist who will debut a major musical ritual based on an intimate look into the universe Friday night in Cleveland.

The BlueWater Chamber Orchestra and the Cleveland Chamber Choir is set to perform the world premiere of Guarnaccia's “Emergent Universe Oratorio” at the Milton and Tamar Maltz Performing Arts Center at Case Western Reserve University.

The concert is among the events that are part of the World Union of Jesuit Alumna congress, which opened Wednesday at John Carroll University. The gathering, held every four years, focuses on a subject connected to Jesuit education and values. The theme of the 2017 international congress is “Uniting Our Jesuit Frontiers,” with the evolving universe among the session topics.

While the universe has formed over billions of years, the 73-year-old Guarnaccia composed his “Emergent Universe Oratorio” in intervals in the course of a five-year period. The oratorio's libretto tells the story of the Earth from the Big Bang to the present day, and features poetry from Rainer Maria Rilke, Wendell Berry, William Blake, Gerard Manley Hopkins and, of course, Berry.

The performance, to be conducted by Cleveland Chamber choir artistic director Scott MacPherson, will be livestreamed on the Case Western Reserve University website.

“I had a huge passion for the idea of bringing forth as much beauty as possible on this theme of our interconnected, interdependent being and belonging, from the beginning to, in and with the universe, all life and each other,” Guarnaccia told NCR.

The piece, he explained, “demands a response at all levels: feeling, seeing, understanding, experiencing and acting.”

“It is neither entertainment, a doctrinal, or even a numinous reenactment of a spiritual-religious position or story, nor just the story. It is more an attempt to evoke a deep awareness through an experience of intense emotional intelligence and the inevitability of a response, and hopefully a transformation, a crack in the hardened crust … leading to an awakening that we are integral to a living universe.”

Or as Berry puts it in his poem “Morningside Cathedral”:

“Beseeching humankind
To bring back the Sun
To let the flowers bloom in the meadows,
The rivers run through the hills
And to let the Earth
And all its living creatures
Live their
Wild,
Fierce,
Serene a
And Abundant life.”

Guarnaccia’s “Emergent Universe” drew inspiration from the 2011 Emmy Award-winning documentary “Journey of the Universe” written by Brian Swimme and Mary Evelyn Tucker. Tucker, a scholar at Yale University in the field of ecology, religion and cosmology, is scheduled to introduce the performance.

“This Oratorio is a magnificent tribute to the beauty and complexity of the unfolding universe across deep time. It inspires the present emergence of a flourishing Earth community,” she said in an email.

On Thursday night, she and colleague John Grim of the Yale Forum on Religion and Ecology hosted a screening of the hour-long film at John Carroll. Their film also spawned an online course series that explores the universe’s formation from a multidisciplinary perspective. So far, the three-class program has drawn more than 16,000 participants, Tucker said.

For the Cleveland performance of “Emergent Universe,” Guarnaccia, has written a complete orchestration for the BlueWater Chamber Orchestra. An earlier version of the piece, performed in 2013 in Shelburne Farms in his home state of Vermont, utilized a small chamber ensemble and chorus.

Guarnaccia is among several composers who have been moved to tell the story of the universe through music.

For many years, Grammy-winning soprano saxophonist Paul Winter has been celebrating Berry's vision through his jazz compositions honoring wolves, whales, elks, wrens and other earth critters. Each winter solstice, he presents an ecological-based concert at the Cathedral of St. John the Divine in New York City.

Joyce Rouse, aka “Earth Mama,” is another student and admirer of Berry. She has been writing folk music and presenting workshops to kids and adults, geared to healing the planet, one song at a time.

In March 1995, Maia Aprahamian, debuted a musical rendition of Berry and Swimme’s work, The Universe Story, in celebration of the 50th anniversary of the United Nations. The work was performed by the San Francisco symphony, with Swimme serving as one of the narrators.

“The day came when I was thunderstruck by the depths of the Universe. This led to my unshakable conviction that was humans get a glimpse of this cosmic magnificence, we would relate to one another and everything with infinite reverence,” Swimme told the audience that night. “Music is one of our most powerful pathways into this greater participation in our evolving Universe.”

As for Guarnaccia, he is probably best known for “A Celtic Mass for Peace, Songs for the Earth,” which he wrote in collaboration with Celtic spirituality scholar John Philip Newell of Scotland. It was performed during peace celebrations in New York and Vermont marking the 10th anniversary of the 9-11 terrorist attacks.

His attraction to the natural world is lifelong. He grew up in the outdoors of Middlebury, Vermont “next to a covered bridge and waterfall on Otter Creek, and as most fortunate rural children, spent hours and years dreaming into the landscapes, skyscapes, and soundscapes in the ‘country.’”

“It's the best education there is: just leave a child alone outside,” he said.

Along with Berry’s writings, the Earth Charter and ideas of Wendell Berry, Joanna Macy and Bill McKibben have all at some point flowed into Guarnaccia’s music.

In addition to the sounds of the “Emergent Universe Oratorio,” there will be a visual feast for the audience at Friday's event: 11 oil paintings by artist Cameron Davis's Endless Spring series. Davis, a senior lecturer at the University of Vermont who specializes in art and the environment, was inspired by the oratorio to paint her series.

Other points of the World Union congress, which runs through Sunday, will dive deeper into the evolving universe. A two-part panel discussion on Saturday will feature Jesuit Fr. Prashat Olaleker of Mumbai’s Xavier College (“Meditation for an Evolving Universe; “Contemplative Movement: New Frontiers for Jesuit Education and Spirituality”) and Barry Rodrigue of the University of Southern Maine (“Big History: A Study of Existence and the Search for Meaning”).

[Sharon Abercrombie is a frequent contributor to Eco Catholic.]

As direct ancestors of the stars, humans collectively share a unique role as compassionate beings, to protect and to heal the earth, Berry said. Creative artists, he argued, can bring us to this point of conversion quickest of all.