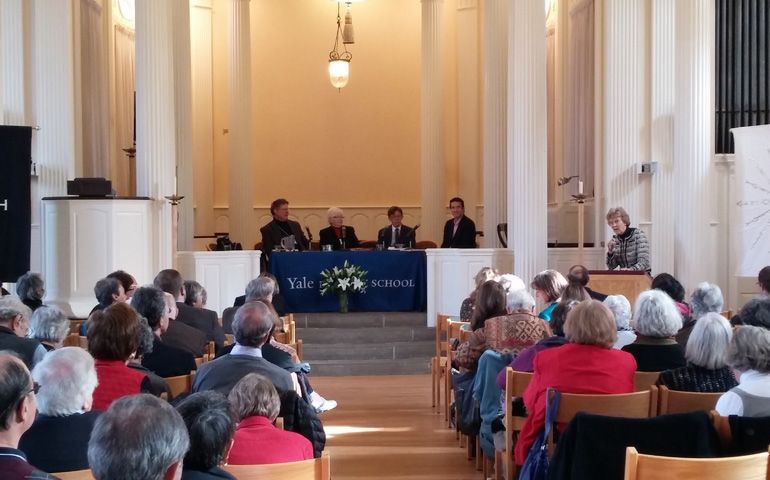 "What is the creativity that brought forth a trillion galaxies?"

The conference was a historic gathering of many of the finest theologians, ethicists and activists in North America, all of whom joined together to contemplate the ways in which the Christian tradition can open up more fully to a sense of the sacredness of the universe and the flourishing of the Earth community.

"We have invited these scholars and advocates with the fundamental hope that they will help us see how deeply we are connected to the epic story of evolution," said Mary Evelyn Tucker, a senior lecturer and research scholar at Yale University and one of the conference's organizers. Tucker and her husband, John Grim, co-direct the Forum on Religion and Ecology at Yale.

"We want to continue to connect the language of Christianity to cosmology," she said.

Judging from the response to the program, it is a connection many in the Christian community are eager to make. More than 400 people signed up for the conference, and it had a lengthy waiting list. Sessions were held in the school's chapel. Three overflow rooms were also set up with a live-stream of the proceedings.

There was much for the crowd to absorb: 11 different panels, each featuring three to four scholars and engaged in conversations on the theological understanding God's relationship to creation, the influence of scientist and Jesuit Fr. Pierre Teilhard de Chardin, ecofeminism, agriculture, water, racial justice, environmental ethics, eco-justice, and spirituality. Evening sessions were highlighted with musical programs and liturgies. All meals were vegetarian, and all cups, plates and utensils were compostable.

Each of these many activities orbited around one central figure: Passionist Fr. Thomas Berry, whose work on the universe story and the environmental crisis has deeply influenced generations of students, including Tucker and Grim. Berry, who died in 2009 at age 94, would have celebrated his 100th birthday on Nov. 9.

Throughout the conference, many panelists spoke of "the great work," a phrase Berry used to describe our need to work with nature's creativity. (It is also the title of his 1999 book.) He believed that if we could see the cosmos as a symphony and Earth as a living planet, we would discover our own role in these unfolding processes. It was Berry's deepest hope that we were shifting out of the Cenozoic era and into what he called the "Ecozoic" period; that is, a time when human beings would reclaim their creative orientation to our planet.

Berry described himself as a "geologian," or "a human being who emerged out of the eons of Earth's geological and biological evolution and was now reflecting on our world," Tucker and Grim write in their introduction to the new book Thomas Berry: Selected Writings on the Earth Community (Orbis, 2014).

Born William Nathan Berry, he chose his religious name after St. Thomas Aquinas, whose belief that all beings participate in the being of God was deeply influential in Berry's early thought. Also influential later in his career was Teilhard de Chardin's grand vision of the role of human beings in cosmic evolution. Teilhard's belief in "dynamizing" human action for transformation inspired Berry's own hope that all human people would participate in the transformation of a healthy Earth community.

But Berry was also realistic about the growing degradation of Earth, and, in the 1970s, was one of the earliest thinkers to foresee the magnitude of destruction that would result from our unbridled consumption of Earth's resources.

The diversity of sessions at the conference was a testimony not only to the breadth of Berry's own great work, but to the ongoing evolution of his ideas.

Teilhard's legacy could be heard in the opening panel on Saturday morning, which featured, among others, John Haught and Franciscan Sr. Ilia Delio, two of the finest interpreters of Teilhard's thought in contemporary times. This was followed by a panel called "Views of the Divine," which considered the ways in which we might understand God's presence in all of creation.

Speaking out of the Greek Orthodox tradition, John Chryssavgis, a theologian and adviser to the Ecumenical Patriarch Bartholomew I on environmental issues, reflected, "It has always been a source of great comfort to me that Orthodox spirituality retains a sacramental view of the world, proclaiming a world imbued by God and a God involved in the world -- a sacrament of communion." (Bartholomew has been nicknamed "the Green Patriarch" because of his efforts to protect the environment.)

"We should respond to nature with the same delicacy, sensitivity, and tenderness with which we respond to a person in a relationship," Chryssavgis continued, "and our failure to do so is the fundamental source of pollution."

Themes related to pollution and the scarcity of natural resources was the focus of Saturday afternoon, beginning with a panel called "Seeds, Soil and Food." Dominican Sr. Miriam MacGillis, who is often credited with bringing Berry's ideas to women religious decades ago, offered a powerful reflection on the sacredness of seeds, a topic that has become crucial as the integrity of seeds continues to be threatened by Monsanto, a leviathan-like agrochemical corporation. In 1980, MacGillis worked with Berry to found Genesis Farm, community-supported farm and eco-learning center in New Jersey.

Women religious were well represented throughout the weekend, with other members of the Dominicans and members of the Immaculate Heart of Mary community and the Sisters of Charity in the audience.

"Women religious have been key to this entire movement," Tucker said. "They have been some of our strongest allies from the beginning."

An entire panel was devoted to the looming water crisis throughout the world and the ethics of water rights.

"Water is a right-to-life issue," panelist Christiana Peppard said. "It would be very, very good if we were to associate the right to life with a human right of access to clean, fresh water and sufficient sanitation."

Both panels, Tucker believes, have ramifications for the church's sacramental life. "What does it mean to baptize with polluted water or to give Eucharist altered with GMOs?" she asked in an interview with NCR leading up to the conference.

A session on eco-justice concluded the day, with panelists detailing their faith-based ecological activism. Carl Anthony and Paloma Pavel spoke of their efforts to organize within religious communities, particularly urban communities of color.

"Historic moments of excessive abuse -- slave trade, colonization, genocide -- developed in tandem with humanity's unsustainable relationship to the environment," Anthony said. The movement to reconsider our relationship to the Earth also offers an "opportunity to reconfigure the legacy of racism and build just cities for everyone."

Themes related to justice pervaded many of Sunday's sessions, which saw panels on feminism, ethics, and jurisprudence. In one of the conference's most inventive moments, theologian Mary Hunt drew parallels between the life and work of Berry and feminist scholar Mary Daly, calling both "Catholic outliers who championed the cosmos."

Although they differed sharply in some ways, Hunt said, "Berry offered the outline of a story capable of communicating the historical scaffolding of the universe. Daly provided the early and strong foundations for ecofeminist religious thinking. Both did so with a commitment to Earth's survival and thriving that has become even more urgent after their natural deaths."

For the flourishing of the planet to become a reality once more, conference participants believe, both our social justice ethics and our legal theories must broaden to accommodate the needs of the planet's fragile eco-system.

"If social justice is not also creation justice, it will fail," ethicist Larry Rasmussen said. Three elements are necessary for this new vision of creation justice to take hold, he continued: "creation deemed sacred, God-talk worthy of the uncontained God, and a 'fearfully and wonderfully made' understanding of ourselves."

Rasmussen's theory found a rich application in a subsequent session on Earth jurisprudence featuring legal experts Patricia Siemen, Brian Brown and Paul Waldau, who suggested that our approach to legal theory and practice must be based on the needs of the universe, not on the insatiable desires of human beings.

Berry believed that the law was inadequate in its attempt to address the harms wrought by humans upon the Earth. He argued that "a new legal system was needed that would respect the Earth's evolutionary processes and inner dynamics," Siemen said.

"It is important to understand that prevailing U.S. laws provide very little protection for the integrity of the natural world," she continued.

True to Berry's own spirit, the conference concluded with afternoon sessions on cosmological spirituality and a final panel called "Visions for an Evolving Christianity," which featured speakers from eight different Christian denominations.

Tucker, who chaired the final session, said although the cosmos is vast and the conference's approach to ecological issues was complex, the goal of her and Grim's continuing work is simple: "The most important thing we can offer is to create a larger opportunity for everyone to participate in the flourishing of the Earth community."

"With Teilhard's optimism and Berry's robust sense of life, we want to awaken hope and empowerment. We want people to have a sense that they are participating in the journey of the universe," she said.

Education, she believes, is crucial to inspiring and motivating people of faith, especially in the milieu of the science and religion debate, which is often fraught by divisiveness. "Journey of the Universe," which opened the conference, is the product of Tucker's 10 years of work with Swimme and Grim. The film is one component of a three-part multimedia project that includes a book from Yale University Press (also titled Journey of the Universe) and a two-DVD set of conversations with both scientists and ecological activists.

In addition to developing these educational tools, Tucker and Grim have devised strategies for educating faith-based communities. She and Grim have also created a Journey of the Universe website featuring articles and bibliographies for teaching. With the help of research associate Matthew Riley, they have designed a curriculum for use in undergraduate and high school classrooms, learning centers, places of worship, and conferences that can be downloaded free of charge.

"We want people to have access to this material. We don't want them thinking that this was a one-time conference that took place here and that they are not a part of it," Tucker said. Eventually, the videos from the conference will also be made available online, and Orbis Books will publish the panelists' papers.

Those who do take the opportunity to listen to the meetings' proceedings will quickly find that it was an event unlike most academic conferences. In a time when arguments over creationism, climate change denial and the Keystone XL pipeline make headlines each week, the conference opened up new, imaginative ways to find God and ourselves in the cosmos. Most importantly, it offered a clear mandate to all believers who claim justice is an essential part of their faith.

"Our whole point is that this is a sacred universe. Cosmology without ecology is empty," Tucker said. "Our future is at stake. Is there anything more important?"

Rarely these days is theology done so creatively and with such a sense of urgency.

[Jamie L. Manson is NCR books editor. She received her Master of Divinity degree from Yale Divinity School, where she studied Catholic theology and sexual ethics. Her email address is jmanson@ncronline.org.]